Can a New Development actually reduce the risk of flooding?

With storms across the UK creating flash flooding in the news this week, I thought it would be a good time to examine what developers are doing to try and reduce their impact on flooding and how this effects people living on or near new developments.

Flash floods are caused by lots of rain falling in a short period of time. These are known as storm events and the severity is categorised by the likelihood of them occurring in any given year.

For instance, a 1 in 1 year event is as the name suggests, the type of storm that would be expected to occur every year. These do not generally cause too much disruption, but it is likely that watercourses will run at a high capacity and drainage systems on some roads will most likely be overwhelmed and cause some minor disruption.

The next common event examined in this paper is referenced as a 1 in 30 year event, with the probability occurring being once every 30 years. Finally we have considered the 1 in 100 year event.

For each one, the volume of water increases dramatically and in the case of the 1 in 100 event it would extend to the full extent of the flood maps modelled by the Environment agency. Fortunately, these kinds of events are infrequent and it is unlikely for somebody to experience one in their lifetime.

When there is a storm event, new developments which feature swales and attenuation ponds (think pipes and baths with the plug in) can store the excess surface rainwater on site usually near the new homes being built. The rainwater is then discharged to nearby streams and rivers where the water would have naturally flowed at a controlled rate thus helping to relieve flooding nearby. These systems are called Sustainable Urban Drainage System (SUDS) which engineers carefully design to cope with everything up to the 1-in-100 year storm events. When compared to land without SUDS, which allows rainwater to flow uncontrollably over fields a significant improvement can be achieved in the speed of the water entering the river systems, thus reducing the risk of flooding.

If you want to know why, continue reading.

Preparing this article reminded me of my GCSE Geography classes…. I knew it would be useful one day… This diagram is part of the natural water cycle, i.e it rains, the rain runs into to rivers, the rivers run to the sea, the water evaporates, clouds form and the process repeats. I am just focusing on the rainfall to rivers part of this cycle. 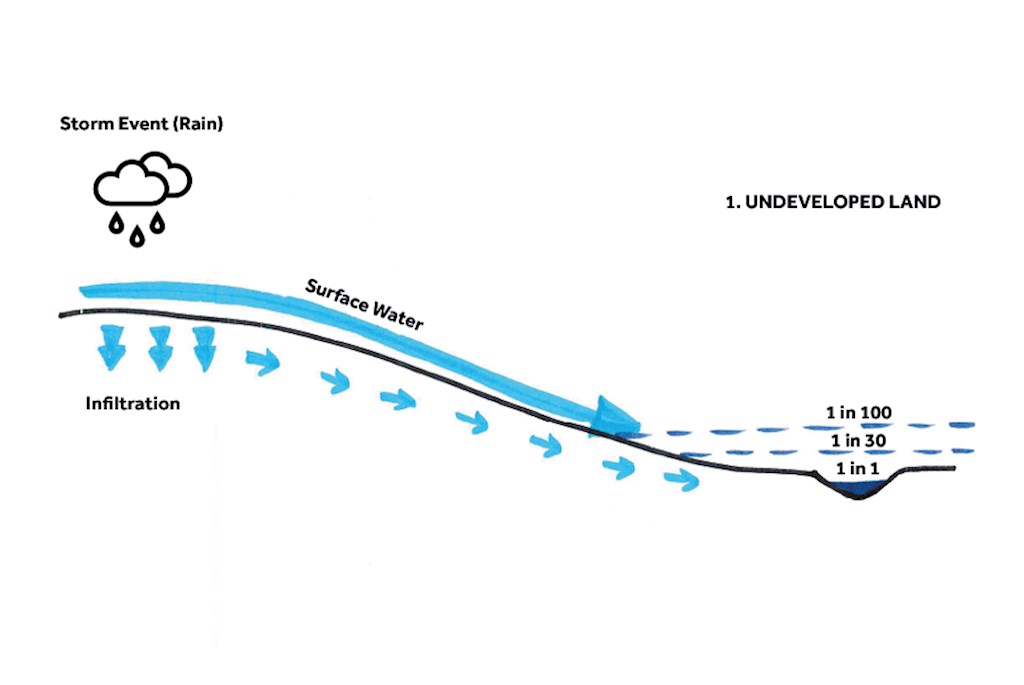 In the diagram you can see that the storm event creates rain, the rain falls onto the ground and some of this will soak into the ground (infiltration). As the storm event increases in severity the amount of water that can soak into the ground is limited to the point where it is saturated. This is an important point as infiltration slows the speed at which the water will reach the watercourse. When the ground is completely saturated a far larger percentage of the rain flows directly over the surface and finds its way to the nearest watercourse at a significantly faster rate.

It is for this reason why a storm event immediately after a period of prolonged rain, saturating the ground can create such large issues with localised flooding. In the diagram I have shown the effects of this by what happens to the watercourse. During a fairly common 1 in 1 year storm event, the water fills the watercourse but it does not flood. In the 1 in 30 and 1 in 100 year storm events, this creates flooding as the unrestricted flow of surface water has nowhere else to go.

Looking at how a new development might impact on flooding I have produced a second diagram showing what happens if a development is constructed without any thought to the effects on flooding. 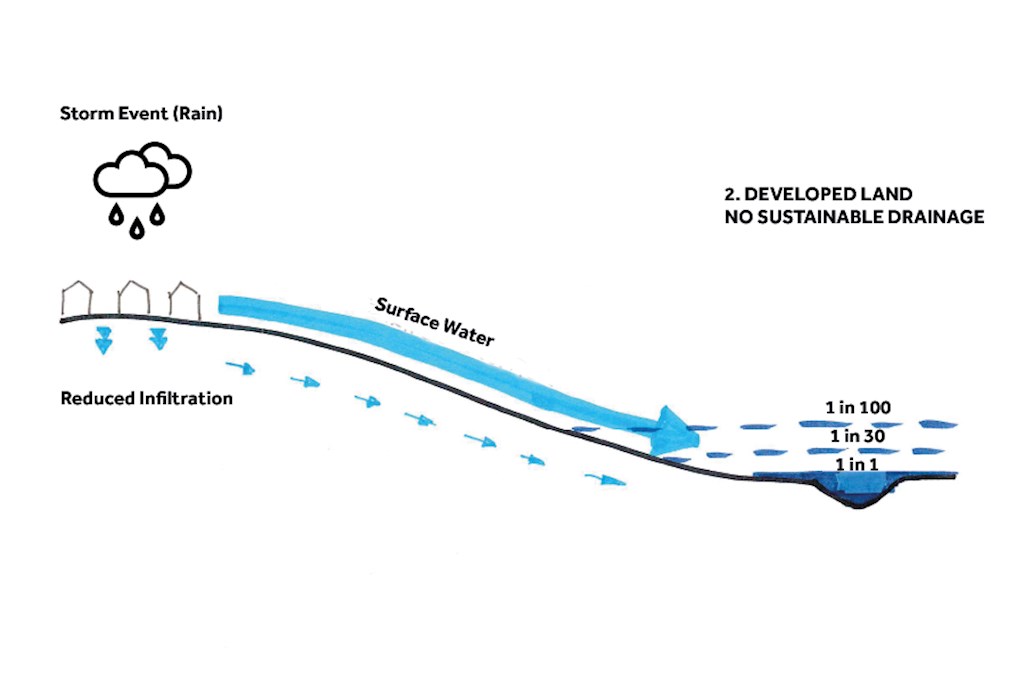 In this example, houses have now been built and the diagram illustrates what happens during the same storm events compared to a natural cycle.

The first thing you will notice is that the houses reduce the amount of natural infiltration. It does not completely remove it as garden areas etc, will still act as before, but the increased number of hard surfaces will all contribute to a higher level of surface water discharge.  As a result the level of water entering the watercourse quickly will be increased and as a result it would increase the chance of flooding, even in the 1 in 1 year storm event.

Over my 20+ years working in development I have seen a gradual evolution in the approach by developers to flood risk. The biggest step change followed the introduction in 2006 of the Planning Policy Statement no.25. Prior to this, the approach was to ensure the site does not flood but little regard was had to the effects downstream.

As this approach has now been around for a long time, it has now been incorporated in all aspects of planning guidance, local plans and strategic flood risk assessments and as such the current systems of sustainable drainage can be traced back to that. 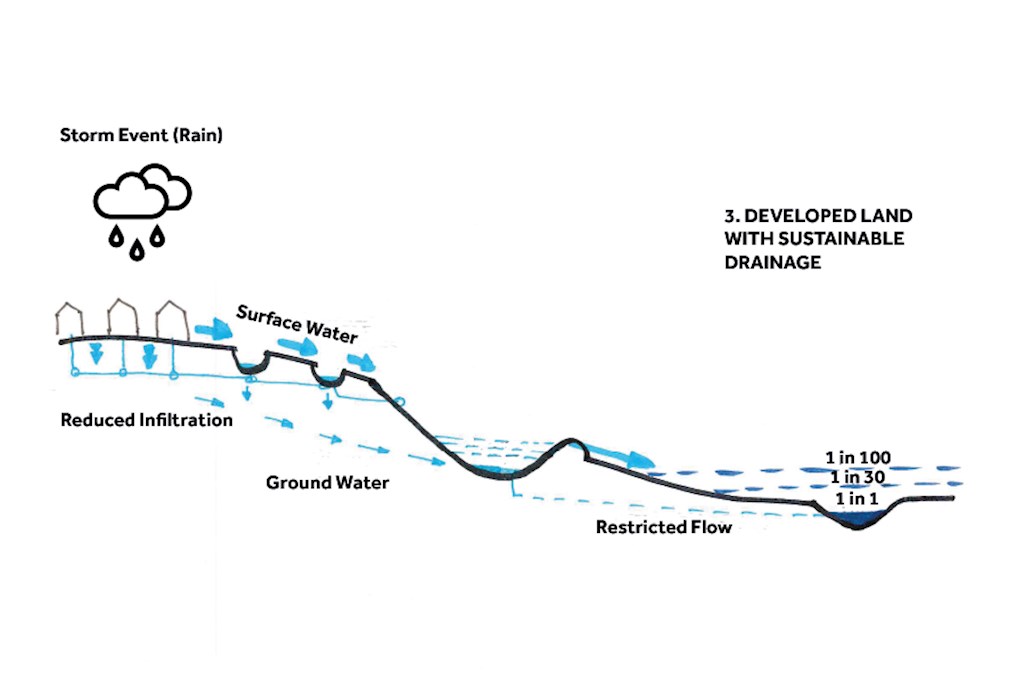 The above diagram shows the principles of how a modern sustainable system works in practice. I have again based it on the same scenarios as before. Where it differs is the way the system is designed to capture the rainwater and simulate the process of slowing down the speed of the waters flow so that it is equal (the test back in 2006) or better than the natural discharge rates illustrated by diagram 1.

In this scenario, the rain is captured in pipes from areas of hardstanding and diverted into swales. The swales also capture any surface water flowing over them, slowing the rate of discharge further.

Swales are shallow ditches that are designed to be mowed, they are often fitted with French drains at their base, their large surface area allows for infiltration into the ground. Any excess water is then carried to an attenuation basin. This is the most critical part of the system as its outfall is limited in size so it only allows a fixed maximum amount of water to be discharged into the watercourse. The way I describe this to people is to liken the attenuation basin to a bath full of water. If the plug hole in the bath was made smaller, then the bath would take longer to empty. This is exactly the same principle. 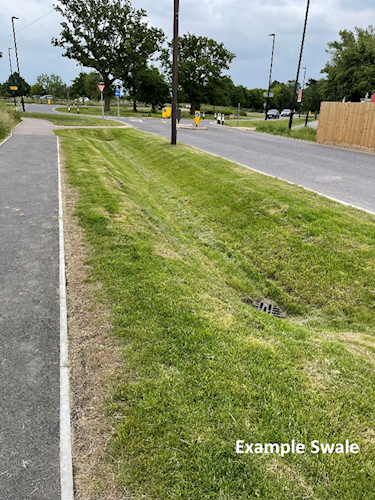 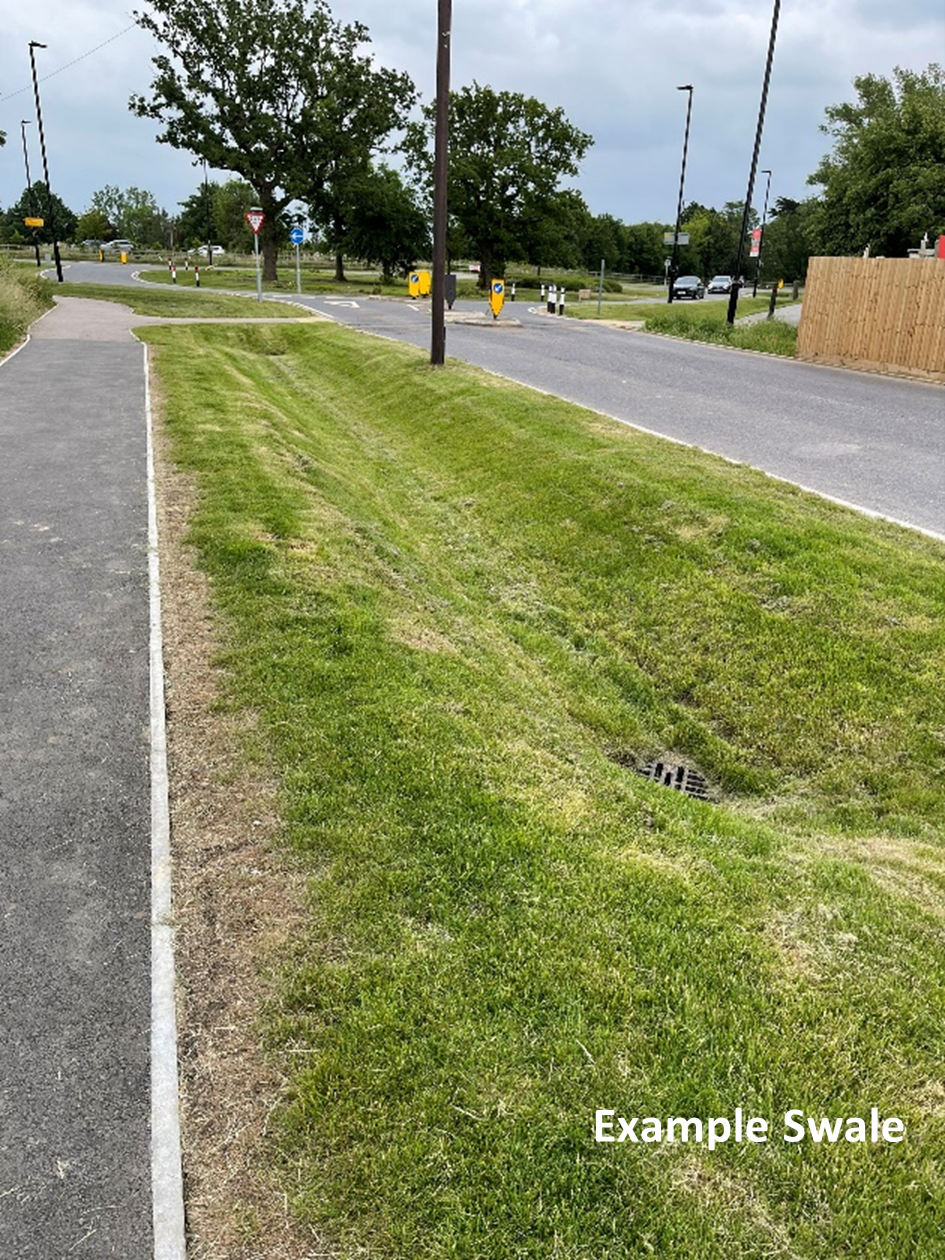 Depending upon the design, the attenuation basin might be dry or designed to incorporate a small level of water. This significantly improves the biodiversity but has limited effect on the operation as an attenuation basin. For the vast majority of the time the basin will contain a very low level of water, this is unlikely to increase in the 1 in 1 year storm event as the restricted discharge rate would be same as the amount of rainfall, i.e. the water will run right through the system without the need for any storage to be utilised.

Where the system comes into effect is where there are more serious storm events. The restricted discharge will have the effect of backing up water in the system and filling the attenuation basin. The basin is design to take the amount of water calculated to be flowing in the 1 in 100 year event. The chances of seeing it full is therefore remote.

A well designed system will therefore ensure that surface water will enter the river course at a far slower rate and therefore will significantly reduce flooding risk, even when compared to an undeveloped site.  So in answering the question posed at the beginning of this article the answer is yes, development can reduce the risk of flooding. 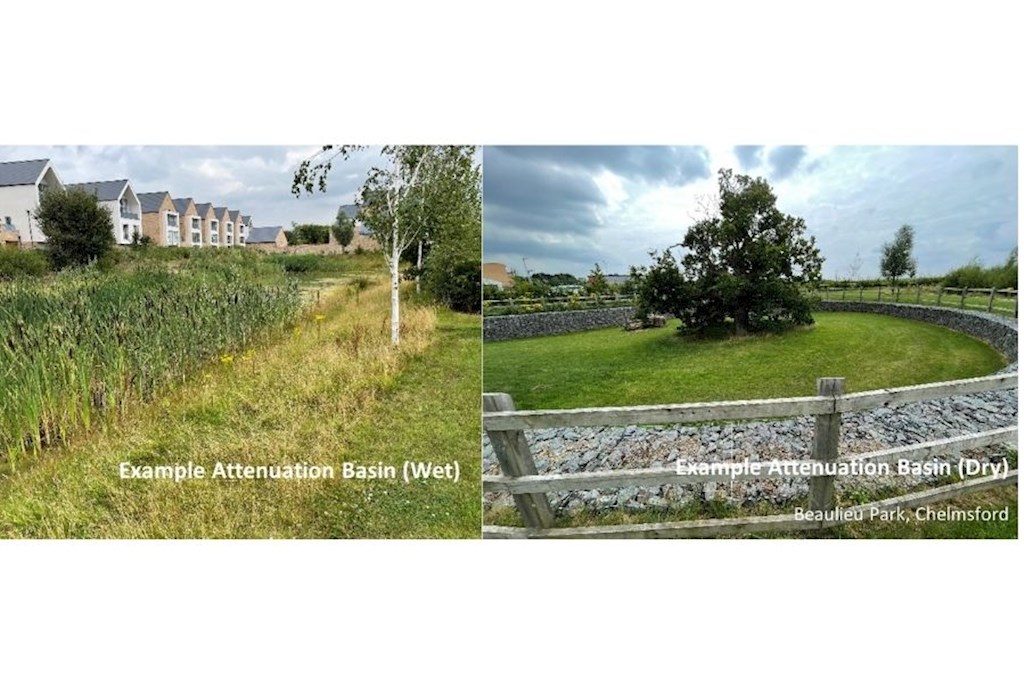 In order to add some data to the theory I set out below a case study of a site that I am currently working on in Clacton, where there has been understandable concern over this issue.

The Development is for 132 units, it incorporates a Sustainable Urban Drainage Scheme (SUDS) incorporating the features demonstrated in the above diagrams and photos.

Over the same area of land, which has been developed and incorporates a SUDS scheme, the level of discharge is limited to the 1 in 1 year event, consequently the outflow from the attenuation basin to the watercourse is physically restricted (think small plughole); Because of this, the level of water discharged is controlled and at remains at this restricted level irrespective of the severity of the storm event.

This is illustrated by the following graph. 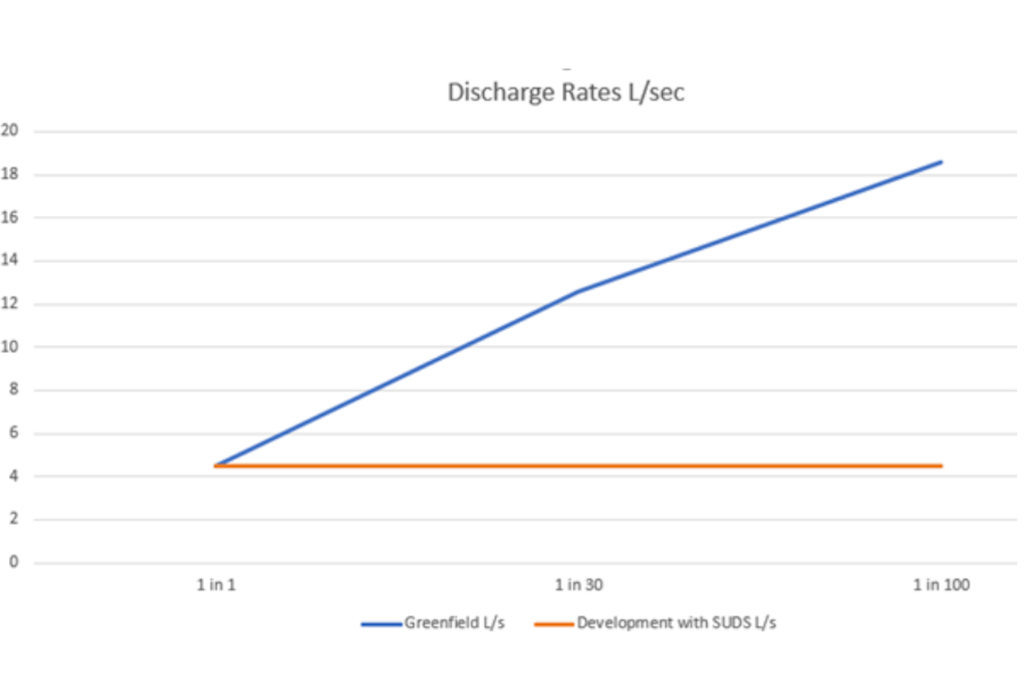 To make these numbers more relatable an Olympic sized swimming pool contains 2.5 Million litres of water, with the discharge rate of the existing undeveloped greenfield site would fill it up in only 37.3 hours (1.6 days) during a 1 in 100 year storm event. This is increased to 55.1 Hours (2.3 Days) during the 1 in 30 year storm event. If the site were to be developed and include the SUDS scheme the time it would take to fill the pool increases to 154 Hours (6.41 days).